It was a bright cold day in March, and the clocks were striking 10.45 when my train pulled into Alnmouth Station. For various reasons, I was starting my ride at Alnmouth. Well, the main reason was that I’d caught a train home from there the other week, and an open return (to be used within a month) was only 20p more than my single. I didn’t waste any time muttering about the insanity of such pricing, I simply grasped the opportunity and started to plot. 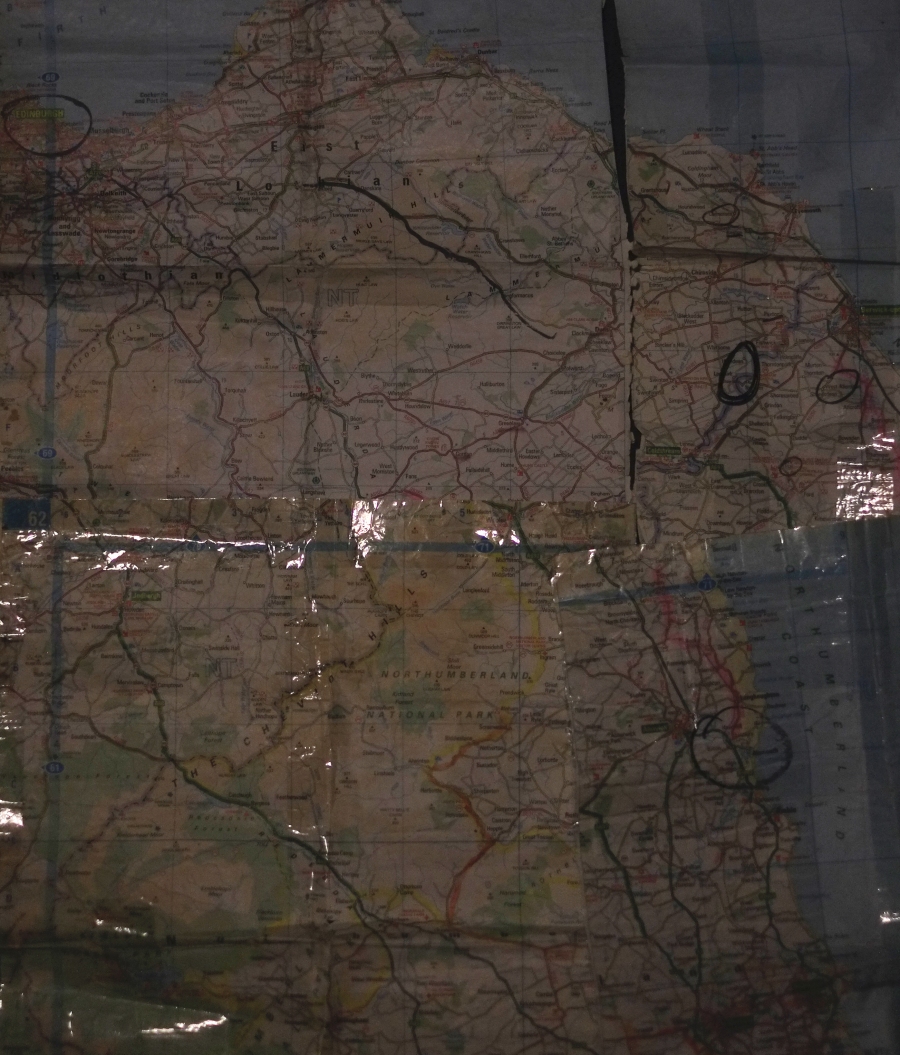 I looked at the maps, and thought about where I wanted to go, and where I could go in a loop over two days, including some new roads and places I hadn’t been in ages. So I planned to start with some lovely Northumberland lanes, cross the Tweed at the Union Suspension Bridge, transit the Lammermuirs and descend Redstane Rigg to Edinburgh, then over the Forth, across the central belt and the Southern Uplands via the M74 corridor, before crossing the Pennines back to Darlo.

It turned out to be an altogether excellent plan, and felt like a proper adventure. 300 miles to unfamiliar places, in the dark, on my own. Ironically, I had a conversation the next day with my mate Colin, who’d spotted the latest trend of “adventure bikes” with luggage strapped all over them, and he was a bit disdainful of the trend, not because people aren’t allowed to go on adventures on their bikes, but the marketing seems ridiculous, when cyclists have been doing this for years without bothering to thing of it as anything special. I like long distance cycling, and the longer distances, but this is partly because they’re an infrequent treat, and an opportunity to go farther than you normally could on a shorter ride. Sidenote: my ride was validated by AUK as 500 kilometres. The 500 is a distance which is rarely ridden, presumably because it doesn’t fit nicely into the awards structure – the gold standard of randonneuring is a Super Randonneur Series, consisting of rides of 200, 300, 400 and 600 kilometres. The 500 does bridge that gap between 400 and 500, and it’s 300 (and a bit) miles, which should appeal to Brits and our imperial units. It also qualifies for a rare badge: http://www.aukweb.net/handbook/awards.htm

All of this is quite irrelevant, though – I’d plotted the route I wanted to ride, and it turned out to be 500 (and some) kilometres, so that was the distance I was going to ride. 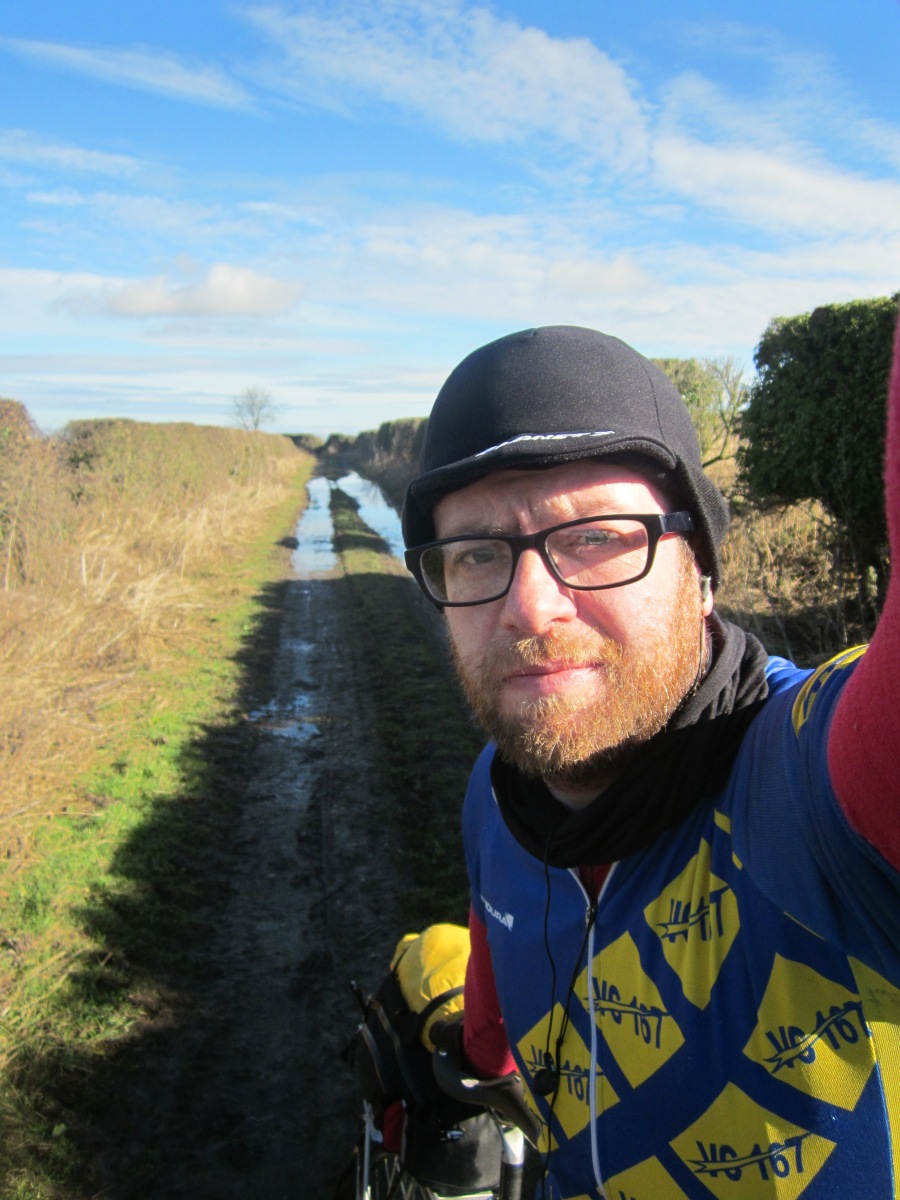 Northumberland is great cycling country. And it was spring! Just about, anyway. I got the comedy offroad out of the way early, transited Alnwick and set my sights North through the gorgeous lanes, admiring the Cheviots to my left, which I would not have to traverse. I crossed the Tweed and the border at the Union Chain Bridge, named for the Union between England and Scotland. Weak bridge, the sign said. http://www.unionbridgefriends.com/history/ 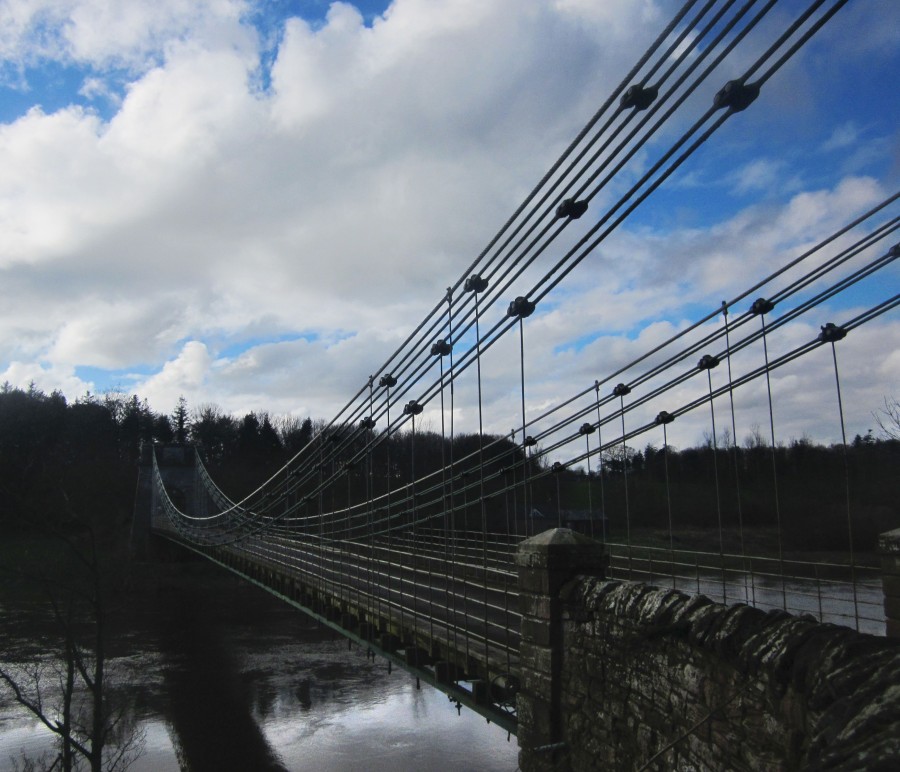 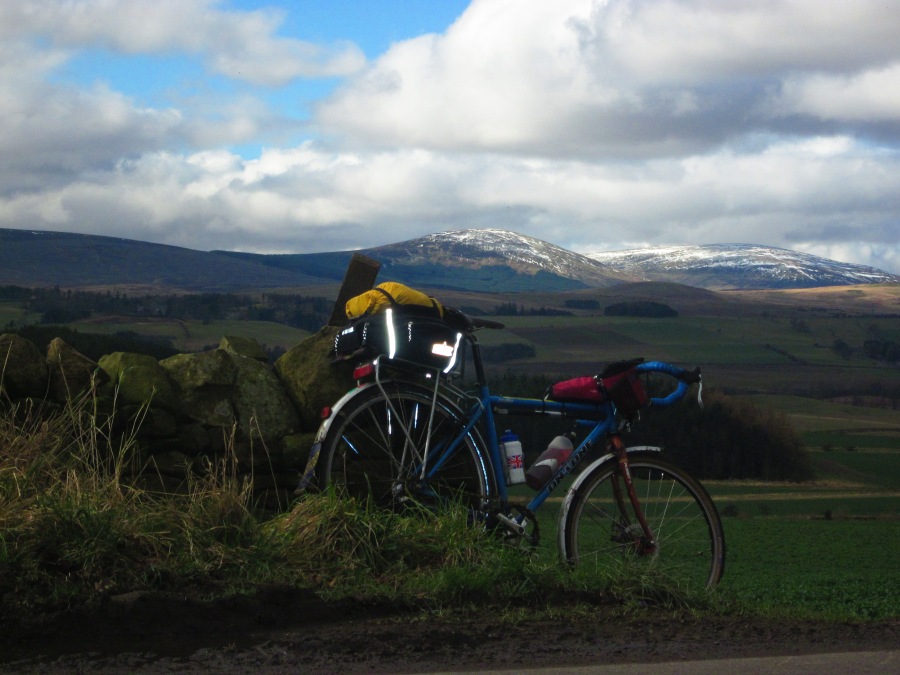 I’d planned to stop little, and to make the most of the daylight with such a late start. Bloody good job, as I don’t think I passed a single shop, pub or cafe that was open until Gifford. OK, I did bypass the throbbing metropolis of Duns, and I’m pretty sure the Honey Cafe near the Chain Bridge was open (it is as good as it sounds). As my bananana must have dropped out on the train, I made do with the flapjacks in my bags, and that was more than enough up over the Lammermuirs. Why is this place not a cycling Mecca? The light was perfect above Longformacus, where the road cuts along the edge of the hills, presenting views back across to the other Border Hills. I didn’t take a photo, you’ll have to go yourself.

I paused halfway down Redstane Rigg to put on extra layers, and grab some photos of the Forth. Wow, I’m nearly in Edinburgh, this is proper travelling. I exchanged a few words with a local who was tacking up the climb. Not far to the top, I told him, hoping it was true. I can’t have been too far wrong, as we chatted again when I stopped at the Co Op in Gifford, where they asked me if I wanted a receipt – Gifford is on the route of at least one of Martin Foley’s excellent rides: http://www.aukweb.net/events/detail/MF01/

I was thinking about this while I transited Musselburgh and Edinburgh to the Forth Bridge. I spotted a few cyclists coming the other way while working my way along the tricksy route from Cramond to the bridge, and then loads of them crossing the bridge at about 6.30 pm. Turns out, there was an audax which started and finished at Queensferry, and I never thought to check. I could have gone to the finish for a chinwag and to eat all the cake. 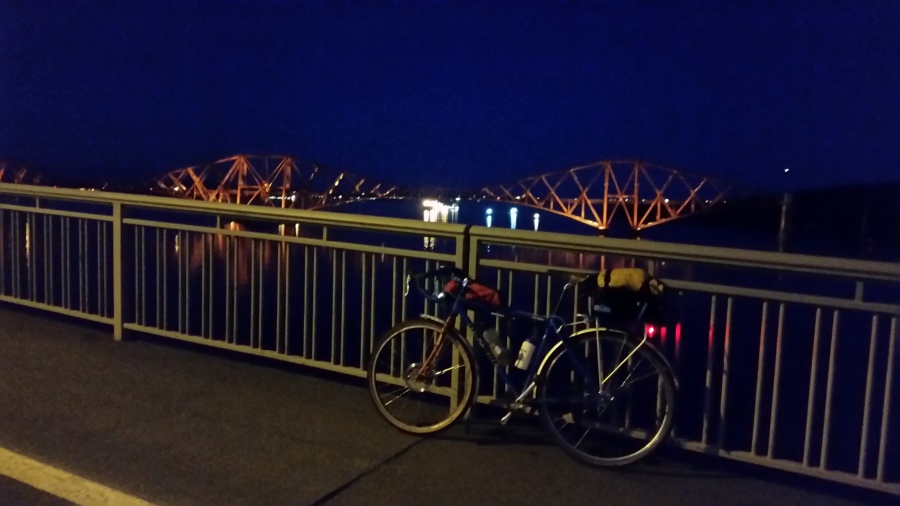 Never mind. I’d crossed the first set of hills, and just-about met my target of crossing the Forth while there was some light around. On a Sunday night, the A-road between Dunfermline and Stirling promised some fast, flattish miles. Apart from having to stop at the only set of traffic lights in the area, this turned out to be true, and I rolled into Stirling Services, having covered 220 km in about 9 and a half hours. Apart from photos, piss stops and vaping (I’ve packed in the fags), I’d only had the one stop at Gifford, and I was pleased with that in hilly country. The staff at the Burger King were lovely, too.

I was distracted by a street party in Bridge of Allan, too – coming into Stirling from the east, the main road was closed, and naturally I just rode through. A gang of locals were celebrating the road closure with a massive barbecue, and I couldn’t help but stop when someone waved a beer in my face. No beer, thankyou, ma’am, but I will have a sausage-inna-bun. I could have stayed there all night. I totally lied about how far I was covering, as I don’t want people to think I’m a nutter when they’re offering me free food.

The next bit was the unknown, to me. I can no longer say that I’ve never been to Bonnybridge, or Denny, or Falkirk. Nearly Falkirk, anyway – I skirted Falkirk and followed some tiny lanes which climbed away from the Union Canal. When I was plotting the route, these banks were lost in the noise created by the Lammermuirs and the Pennines, but what a bastard that bit was. The roads were in a right state, the temperature was near freezing, the dew was falling and turning to frost, and I was crossing every little valley going. At one point I thought I was heading towards the Falkirk Wheel, lit up at night, but it turned out to be a pair of transmitters. However, I was definitely heading that way, and as we all know, transmitters are at the tops of hills. The Central Belt looked amazing, though, there were lights all around as I was crossing from the Forth to the Clyde, Glasgow was to my right and to my left, Edinburgh and the surly glow of Grangetown pouring smoke into the sky.

It turned out to be an excellent night time route. I had an hour to myself on the A70/A73, trailing alongside the Clyde.

It took forever, though, to get to Abington Services. It was a long slog (about 100 km) from Stirling to Abington, and disappointingly, when I got to Abington, none of the hot food places were open, and I had to make to with Krispy Kreme donuts. The staff were again lovely and set up a table and chairs for me. I was working out how to carry the third doughnut on my bike when I realised I’d already eaten it.

When I left Abington, it was raining. It always rains here. and I’m surprised the road hasn’t washed away. Oh wait…

I’ve complained before about the B7076 and how ubiquitous it is on audaxes around the Borders. I totally understand the reasons, and I’d subjected myself to it, as there are four 24-hour services between Abington and Lockerbie. I reckon that’s a fair pay-off for the shite surface and hours of tedium. There’s an endless descent which never feels quick, but doesn’t offer any opportunities to warm up on climbs. There is one underpass for shelter. I shivered my way to Johnstonebridge where I hid from the rain and had a nap and a cooked breakfast – the alternative is miles and miles of bugger all, and drinking rainwater out of clarts (sorry, Steve) -see https://www.strava.com/activities/889085656

I felt refreshed after maybe a half hour of napping, being repeatedly awoken by the conversation amongst long-distance coach drivers. And those services were chilly – my device recorded a maximum of about 14 degrees celsius, compared to the balmy 26 degrees at Stirling Services. I don’t think I’ve gone into how much time I spent putting on layers and taking them off again – I reckon I spent about two hours across the ride just changing clothes. No wonder late winter overnight rides aren’t popular. I had all my layers on (shorts+legwarmers+two pairs of socks and overshoes, winter tights over the top, and a merino baselayer, jersey, Roubaix armwarmers, winter gloves, glove liners, and jacket on top) when I left Abington, but I wouldn’t have minded an extra layer on top. And it wasn’t far over the English border in the morning before I had to stop to strip off the tights, and the jacket, then I put the jacket back on to descend Yad Moss…

I was feeling very sleepy on the descent of Yad Moss, and stopped at the Last Homely House – the Langdon Beck pub. It was closed, but the bench outside was out of the rising breeze and warm enough for a nap. I got chatting with someone who came out for a fag, and she invited me to her Gran’s 90th birthday party in the pub that night, but again, I declined and explained that I probably needed to get home. Two party invitations is pretty good for an audax, I reckon.

I was back on very familiar territory on this section, and just touring home. Teesdale was looking gorgeous. There isn’t a bad season to visit Teesdale, but it’s extraordinary in spring, when the snow lingers on the tops and the tough arctic flowers, left behind after the retreat of the glaciers, start to bloom in the valleys.

I made it back to Darlo just ahead of rush hour, which was perfect. I had vaguely planned to get around in 24 hours, but I’m not fit enough and the route was too hilly for that sort of stuff. Plus, there was plenty that I wanted to photograph (there are always excuses for stopping). I’ve never ridden such a distance so early in the year, and I think that’s part of the reason why I did enjoy it – it’s a one-off, a never-to-be-repeated bit of escapism from the daily grind. And just look at where you can go. 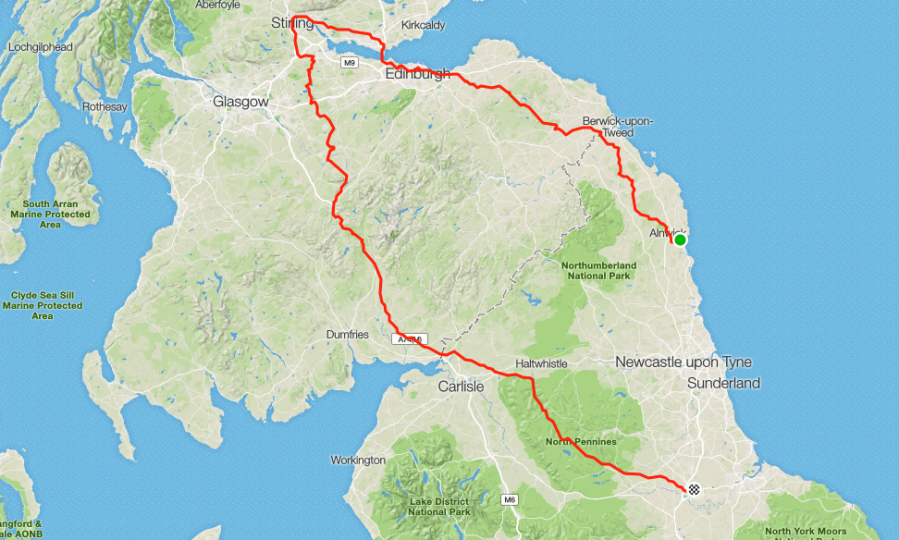 View all posts by audaxdarleaux

Three Bromptons, a Moulton and a Bickerton from Northallerton on 27/03/21